The Sky Has Fallen (2009 – to Infinity and Beyond) Movie Review 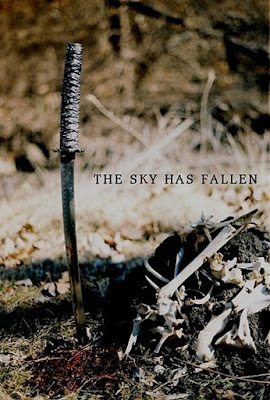 Watching this movie it's striking to see how much can be done by one man with passion. While Hollywood cranks out ninety minutes of garbage at the cost of a billion dollars a gonzo filmmaker can produce ninety minutes of entertaining garbage for .00002 of a percentage of that. If Doug Roos makes 'Suicide Squirt' or 'Batdork vs Superlame' they might have made more sense. Seriously a billion f'ing dollars, a whole building of writers, thousands of comic books and no one could come up with a better way for two losers who can't get dates on a Friday night to become bros than 'let's form a my mommy's name is Marta club'? Or 'Susie pom Squad' lack of anything, script, bad guy, heroes, sense, continuity, anyone to care about, and the one big bad, The Joker, could have been taken by Milley Cyrus in Celebrity Deathmatch.

The Sky Has Fallen Trailer

TSHF has a beautifully scored soundtrack, FX, a weirdly interesting story and many elements that predate 'The Walking Dead'. Numerous filmmakers get off track using fancy computer generated special effects instead of basic camera and makeup techniques. With green screens technology assessable to even amateur filmmakers it gets overused. Professional actors have a hard enough time trying to react, interact, or play off of something that isn't there (watch 'Birdemic' (2008), please don't it's really bad). So taking someone with no acting experience/skill/aptitude and throwing them in front of a green screen isn't going to work well. Using practical effect only helps wannabe actors be convincing to audiences.

OCD isn't a stranger to artists or creative types. Making short or full-length films in some ways is a resume for people working on them. Working on reshooting and re-editing the same film for ten plus years isn't a good representation of the level one's skills are at now. There are some really nice well shot scenes in this film but the cinematography of this film is at an overall lower level. After a decade the people working on this film are at a more advanced stage in their experience. Mr. Roos also does everything on this movie. Which shows off his considerable skills but leaves him little time to really focus on any one thing. Most films where one man does everything normally turn out badly. For every Terry Lofton, 'Nail Gun Massacre' (1985), there's a hundred Tommy Wiseau, 'The Room' (2003). This movie is much closer to 'Nail Gun Massacre' than 'The Room'. Not to mention the twenty-minute roll at the end listing a ridonkulous number of executive and associate producers watering down meaningful contributions of people who took a chance on a dream over a decade ago.

IMDB 'The Sky Has Fallen'

The big problem with this movie is the chronic camera hopping character to character. Watching this movie shows the viewer what it is like to have Popcorn Brain. Another issue is in a post-apocalyptic wasteland neither of the two survivors has any gear. Not a water bottle, backpack, fanny pack, sleeping bag, tactical vest, jacket, nothing! The main dude Lance is continually giving things to other people throughout the film, that he pulls out of mid-air. But at least it isn't 'Things' (1989) bad. Which had a budget of forty thousand dollars Canadian (adjusted for US dollars and inflation that's like $1,000,000)

Queen finally had to stop messing with Bohemian Rhapsody due to the tape being worn thin (in this digital age they would still be working on it). It is time to take the knowledge and experience gained from making this movie and pour that into a new project. Of Course if you're Sam Raimi you just remake the same movie you just spent the better part of a decade making (Someone explain this to me? Evil Dead one and two are the same damn movie. Making it worse, the first one is better!) When your film's website looks dated and it has been getting awards for a decade it might be time to move on to the next project.

Watch 'The Sky Has Fallen' Here
Posted by Jeffo at 8:19 PM