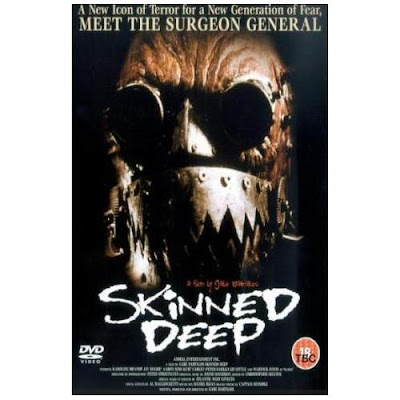 The funniest thing about this movie the guy who played "The Brain" got the role by agreeing to run through Times Square naked. This guy thought 'no way in hell the producers of this low budget film, who are operating out of a van down by the river, will ever come up with the money to fly me and cameraman out there to film it'. Well, he ended up getting accosted by a bunch of old ladies while he was running through Times Square naked, who turned out to be undercover cops. The second thing is that very toned leg coming out of a very tight short leather miniskirt IS NOT Female! Warwick Davis is entertaining, way too big for this movie, and accent was out of place! It's weird to have this inbreed family in the middle of nowhere to have a member with a thick English Accent. Even weirder is his weapon of choice.

The heroine is a very pretty one and done actress. I'm always amazed when I see a talented actor or actress but they only did one movie than they disappear. No one thinks of how long it takes for a movie to make it. Especially a pasty D&D fanboy living in mommy's basement, but think they have their own place cause they have a whole level to themselves except for laundry days, creepy weirdos that watch this type of movie. Once a low budget gets made, travels the film festival circuit, gets picked up, has the distributor adds a nude scene or two, then releases it on VHS or bundles the rights with a couple Cirio H. Santiago films to be shown on late night cable. Couple years later the right people start noticing the film and want to cast the actress in their film. But she is now married with children and embarrassed about the "artistic" film she did in college. Even well known widescreen releases don't cause good actors don't break out right away, Kevin Bacon went back to small acting parts after Animal House (wonder why Friday the Thirteenth got such a big name.... he was still a starving actor), Rose McGowan went nine years after Encino Man (she was the actress that did the body art on the sliding glass door at the end) before Generation Doom came along. Not saying any actor in this movie is good enough to be in another one, just the actress was a couple levels up on the old Dante meter than the rest of the cast. Definitely a level or two above being buried up to one's nose in human waste with people stepping on your head.

Movies like this show talented people can make an enjoyable low-budget movie that other people besides relatives who politely nod and smile, while desperately trying to go to their happy place hoping for the horror to end. Not the horror like in horror movie but like soul sucking, never getting this hour back, want to shove a Cheeto in the their eye so something interesting will happen, or at the very least they can get out of watching the rest of the artistic expression that can't be called a movie cause the definition movie is an interesting visual representation of a great story. I hope they didn't show this to relatives if they ever wanted to be invited for Easter brunch ever again. Not saying this is a good movie by major motion pictures standards, more of this make more sense if you're tripping on acid after lobotomy surgery. God knows how they got Warwick Davis to be in this movie. He must be into some sick twisted stuff to be blackmailed to do this sick twisted movie.


Just something about an inbreed, backwater family, that have enough mental issues to make Dr. Phil go screaming buck naked down the street in the middle of the night, makes for great low budget horror or X-Files episode. There are more than a few scenes that will leave a scared image on the brain, and a few others that leave the watcher more confused than a millennial stuck in a panic room with a rotary phone. But anyone watching discount bin trash like this already has a few mental issues...... 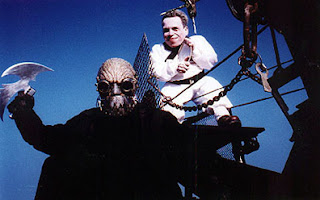