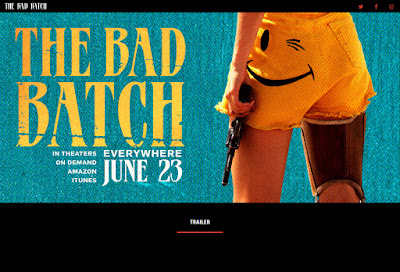 Not a typical indie film or small film I would normally review. Big names in the cast, marketing campaign, but with a budget of six million dollars and theatrical release a year after debuting at a film festival we can make an exception. Plus I have been waiting a damn year to see this stupid film. It shows that indie filmmakers can break out. That the visual medium of film is more accessible and affordable than ever. Once a good old boy network or rich kids (Howard Hughes) with a bullet proof ceiling. A talented person with a good eye and story can get noticed. More important a good script can raise funding and attract big named actors.

From the trailers, it looked like it was going to be more of a grindhouse film. But little blood showed up on screen. The director mostly did the butchering out of view, think of the scene in 'Children of the Corn' (1984) where they force the hand of the restaurant patron into the blender (covered my eyes, I was ten. Took me twenty years to watch that movie again and realize there is nothing scary to see except blood splatter on the wall. No fingers flying, no gross imagery but in my head) so those of you that cover your eyes during scary scenes, this movie might give you nightmares. If this film was released in the 80's it would be PG. 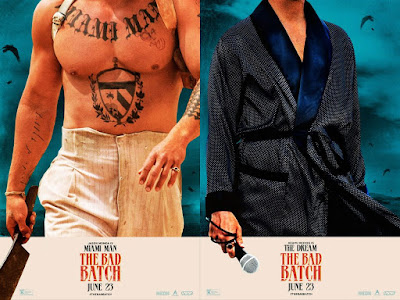 Being a huge fan of George Miller the opening of this film was great. Twenty Minutes with little less than a line of dialog. Director Ana Lily Amirour sets up a story visually that can easily suck the viewer in for the rest of the ride. This style also leaves the viewer wanting more and with a bunch of questions. In one scene with no dialog between Jason Momoa and his daughter reminiscent of 'Jaws' (1975) dinner scene with Chief Brody and his son, that is shamefully overlooked when understanding why the film is so good, is an important moment of character development that most movies ignore. Especially important for a low-budget movie being able to stretch film time with inexpensive scenes while keeping the viewer engaged, bonus points for doing character development at the same time. It takes a special talent to use the surrounding scenery to help emerge film goers into the movie world. Another recent relatively low-budget (four million Euros) film 'The Girl with All the Gifts' (2016) is good to check out, for those wanting to see great character development, limited dialog and use of surrounding scenery.

Another way directors get more out of their resources is to shoot on location. Being filmed in California the actors weren't acting that they were in a miserable place, they were. High temperatures, bright sun, and wind gave the film a level of realism and believably that some actors can't deliver on a sound stage. During filming 'Alien' (1979) the scenes in the ventilation shafts were brutal for the actors. Hot lights, no air flow, small space but on film audiences took the hot, sweating, tired, exhausted actors as being terrified. In 'Spider Baby' (1967) the high heat during shooting made the cast seem truly insane. At the same time shooting on location gives the director a great chance to expand the scene. No restriction of a sound stage or partial set up. The location can almost be another character in the movie.

Acting abilities of both relative newcomer Suki Waterhouse and (I got my start on Baywatch) Jason Momoa are helped by the harsh location. Suki did a convincing job portraying a clueless teen that has been thrown out of society for refusing to adhere to social norms and failing to realize actions have consequences. She has been in a number of projects in a short time with four more movies coming out in 2017. This movie was made for Jason, but somehow it's not what it could be. His accent was distracting, playing a Cuban that escaped to Miami before being labeled a bad batch thus banned from society, but coming off more of a Chicano from South California. The one hand to hand fight scene was started and over before anything really happened. Needed a 'They Live' (1988) drag down all out brawl. The movie did a good job developing his character as something more than just a meathead but not necessarily a bad ass.

This movie will not have huge box office receipts. Many will be disappointed by the lack of gore, boobies, and special effects. Others will stay away due to the perceived notion this is a grindhouse flick. One can blame it on the advertising. Many movies have been DOA due to the marketing department not understanding the movie. Other times movies don't know what they want to be. One famous example is Don Coscarelli's 'Kenny & Company' (1976). The movie was a great film but not fitting into any one category, drama, comedy, or horror the studio didn't believe in it. Marketing didn't understand it. But it's a good movie. Bad Batch doesn't know what it wants to be. The story is about a brutal apocalyptic wasteland where there are no rules except survive, but also wants to be about a fathers love for his child, or the strong feminist who can survive anything in a male dominated society, or the sexy girl in distress, or like the trailer suggests a grindhouse film. It is a visually entertaining film that takes a few detours but worth a watch, but if you're expecting something from this film it will leave you disappointed.