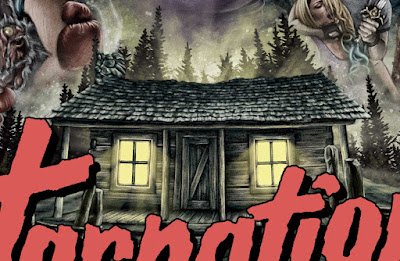 A movie can lose it's way, rambling on for eternity till the cast, crew, director, and audience just in one way or another (either the film ending or mass suicide) wants the horror to end (horror as in nails on a chalkboard or mind splitting headaches, not the blood and guts we want to see). Seems like, they only wrote the first twenty or so minutes then winged the rest without regard for anything in the first part of the film. Ozploitation films are awesome in their own retarded redheaded incest baby with extra fingers, Michael Berryman lookalike, short bus kid of the future, kind of way. The director, Daniel Armstrong, coined his own term 'Neo Pulp', which he should spend more time in script development and less time on trying to make 'Neo Pulp' happen. 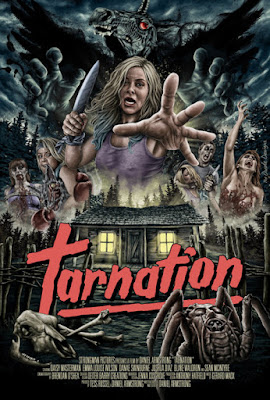 In all fairness, the first twenty minutes are really good. Evil unicorn, bad-ass celestial virgin, kung fu monks, cute actress getting dumped on, drunken ex-boyfriend damnation party all at a fast clip. Then the brick wall, hear the brakes, tires screeching, loud crash of metal and an explosion. The movie till the end is small skits and random acts, with the cute actress looking like an alcoholic trailer trash housewife who hasn't showered in a week. It really seemed that they were trying to film Daisy Masterman (Oscar) in the most unflattering ways possible. Didn't help she seemed to be taking on and off her push up bra between scenes. 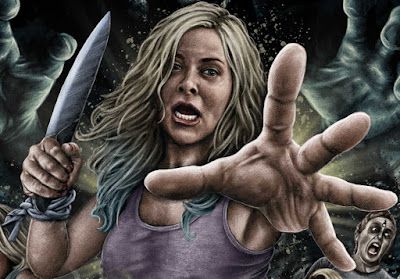 Low budget movies can be great, this one is not. Rule one when working with a minimal budget or less than spectacular special effects, Less is more! Think Jaws (1975) or Terminator (1984) the shark is seldom seen as is Arnold cutting out his eye. Everything is implied and creative angles. This movie is like a bad old slow magician where the audience can tell how the trick is performed. Close up, long shots, with good lighting, doesn't make anything scary. The evil unicorn becomes less scary and more weird as the movie rolls. Bluecifer, the public artwork outside of DIA, is scarier than the unicorn. And the classic 80's toy Boglins is way scarier than the weird ball with eyes that came out of nowhere for one scene.
Apologetically a fan of The Evil Dead (1981) with many Deadesque nods. But these guys learned nothing from watching the Evil Dead. Bruce Campbell and Sam Raimi have talked about the market research they did, finding once the action starts it can't stop. But also the evil/terror/monster has to have rules. In this film, things are just happening randomly, not connected seemingly to anything else. The whole movie is random characters dying and coming back to life. The whole second and third act are sorely missing motivation for the main character, leaving Oscar to do her worst Ash impression.

If you happen to be in the dark corners of the interweb, where light is the enemy and lemon parties happen, and you happen to come across 'Tarnation' or aka 'Cabin of the Damned' or 'Die Damonen Sind Los' only watch the first twenty minutes. Mister fast forward button does nothing after this mark. 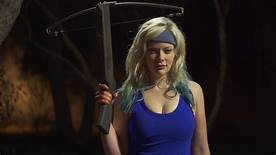