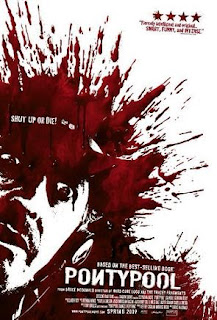 Pontypool was adapted from the novel Pontypool Changes Everything by the author, Tony Burgess and directed by Bruce McDonald. While the argument can be made that it is a twist on the Zombie genre, McDonald spoke out against classifying this film as a zombie movie at Rue Morgue's Festival of Fear expo in 2008. I won't get into exactly what he said, as there are some spoilers within the statement that I think would do a viewer a disservice to know before seeing the film.

This film is not for the blockbuster amused, or the hardcore gore fans (although it has its moments). This film is perfect for those with a great imagination and who still find that they can scare themselves at night when they are all alone. The look of the film is very dark, but lit perfectly so that you never strain to see what is happening. The dialogue is what sets this movie apart from the rest. Burgess gives you such great dialogue that it will not only keep your attention, but it will also challenge you to think.

Stephen McHattie ("Watchmen", "A History of Violence") plays Grant Mazzy, the brooding radio announcer who spins a fine web of silken words to appease his new station manager Sydney, played by Lisa Houle ("Emily of New Moon"). Together with Georgina Reilly ("Eddie: The Sleepwalking Cannibal") as the technical assistant Laurell-Ann, they work towards updating their listeners on local news of the morning when all hell starts to trickle loose.

Although most of the film takes place within the radio station, there are still plenty of shots outside of the station that remind you of just how alone we all are at 6:00am, when the sun has yet to make itself known, and the night still holds all of us captive.

You should definitely give this film a chance and join the cast on a blind journey into the unknown, where fear truly terrifies.

Pontypool can be found streaming on Netflix
Posted by Terry McGhee at 1:03 AM