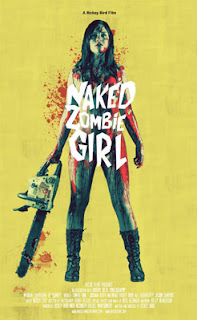 The trailer to define a genre has just been released by Hectic Films Productions. Rickey Bird's Naked Zombie Girl looks to be a haunting yet fun midnight maze of nudity, narcissism, and blood sputtering chainsaw action of Grindhouse gore gone wild!

Rachel Montgomery working as a Producer and First Assistant Director along with Director of Photography Brent Peters come together in supporting the Director Rickey Bird in an all star line up of up and coming actors and actresses.

Meghan Chadeayne bares all in this mad dash to outlast the ever present dangers in a post zombie outbreak. Along for the relentless ride of rampage is Ali Doughtery, Josh Keith Matthews, and an endless array of limitless talent in DT Carney, Robin Steffen, Jason Sanders and Shaun Piccinino as zombies. Nick Reisinger pulls every trick out of his bottomless make-up bag and along with Jason Sanders on special effects and editing, they succeed in creating some of the best zombies to shamble and shake across the screen in this diabetic coma inducing eye candy of a trailer. What can be better than the Naked Zombie Girl trailer? The short film itself!

You can help support Naked Zombie Girl by Clicking Here!