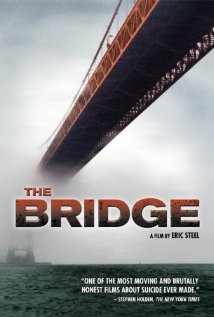 The Bridge is a documentary about the Golden Gate Bridge and the tragic loss of life that is voluntarily given by so many. The filmmakers captured 23 of the 24 suicides that took place from the bridge in 2004, and show the stories and footage from some of those who jumped to their death as well as a survivor and a rescue.
While the subject matter is very dark and bleak, the stories run the full spectrum from awe inspiring and forgiving to maddeningly depressing. It is an eye opening look at something that we as a society choose not to see, or choose not to think about.

Eric Steele directs the documentary while conducting interviews with witnesses and family members of those who are no longer with us. Some have found an understanding and carry with them a forgiveness for those who chose to end their lives while others are still questioning and baffled by the loss. For anyone who has dealt with mental illness in their lives, whether it be through a family member, friend, or even themselves, there is a very real feel to the stories that one can easily understand. For those who have never experienced something as chaotic as mental illness, the film offers great insight into the human psyche and just how far we all are and feel from time to time.

From the thermals that warp the footage on hot days, to the clouds and fog that roll into the bay and shroud the bridge in a mist, the film brings the viewer right up to the cold, damp railing and lets you experience the rumble that vibrates through it as well as the bounce that you feel when you stand upon the bridge as a truck drives by. From the people who refuse to look up from their shoes as they walk by someone sitting on the railing to those who stop and try to talk to them, there is a sense of tragic loneliness as well as heroic interception that the film brings to the screen so beautifully in an agonizing way.

The Bridge can be found on Top Documentary Films and streamed for free.
Posted by Terry McGhee at 3:41 PM