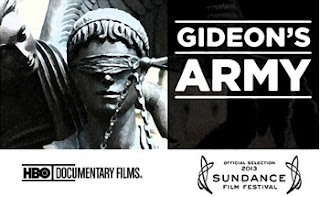 Gideon's Army is a documentary film that tears the rusted lid off of the justice system to expose the hidden truths behind why Lady Justice wears a tear stained blindfold.

Dawn Porter is the founder of Trilogy Films and along with Motto Pictures and HBO Documentaries they follow the lives of three Public Defenders who give everything they have to strive to prove that a person accused of a crime shall indeed be held innocent until proven guilty in a court of law. Travis Williams, Brandy Alexander and June Hardwick confirm the nightmares that anyone who has ever served as a juror knows first hand, that our justice system is flawed, and that the assumptions of guilt can quite easily be the downfall of the innocent.

The film deals heavily with the morality of personal struggle and in no way, shape, or form does it endorse or celebrate the protection of the heinous criminals who feed like parasites off of the dedication and hope of those who are there to attempt to counterbalance the heavily laden scales of justice to give everyone a fair fight in court.

It is far too easy for those who have never experienced the cold hard glare of the American Justice System to sit back and assume that all is well, and that no person can be found guilty unless they are guilty. I mean, they must have done something to be arrested in the first place, right? Wrong!

Gideon's Army is the gavel slamming hard against the well oiled and waxed table top of preconceived notions. Before you find yourself in front of a judge in a court of law as a defendant you should know just how stacked against you the deck truly is. Gideon's Army will give you a glimpse of the horrors that await, and also show you that through dedication and hard work, there are indeed a small group of people out there who are fighting just as hard as you are to keep you innocent until proven guilty.

Gideon's Army can be found on HBO Go
Posted by Terry McGhee at 3:10 PM