Six Feet Down Under (2016) Episode One Review 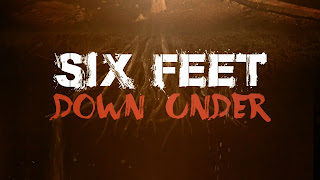 My apologies for taking so long to get this review out to the masses, after watching the first episode of Six Feet Down Under, I had to take a break to peel my man panties off the floor and take a shower.

Take everything you love about any Jason Bourne movie, and then trim away all the fat and boring segments that threaten to lull you to sleep, and you may begin to understand just how action packed and ready to please Six Feet Down Under is.

Guy Grundy brings the pain in a way that will leave you a little sore after watching, as you cringe and flex along with the action in the same fashion that you might while watching a mixed martial arts fight on television. Shaun Piccinino may be in need of a quick detach scope, but he excels at kicking ass and leaving without the need to take names for a second matchup. Aaron Schoenke was a bit of a surprise. I’m used to seeing him play some of the fan favorites from the Super Power Beat Down series, such as Joker, Nightwing, and even the web-slinger himself Spider-Man. Gone in this role is the slightly twisted sense of humor and wit, but there is something under that cool exterior that leaves you excited to see where things will lead in future episodes. Hopefully, we will get to see his fighting skills come out to play with the other bad boys of the series. Anthony Appello isn’t just a stand in supporting actor, he has the attitude, acting scraps, and imposing stature to be the yang to Grundy’s yin. Seeing these kinds of things really gets me excited. As one of my greatest pet peeves is a supporting cast that seems so throw away from the start, that you could care less if, how, and when they bite the bullet. Then we have Vernon Wells, of course, I don’t need to say anything more. Yes, he is still Vernon Wells, and yes you should be as grateful as I am to see him on the screen again.

All in all, Six Feet Down Under is for those of us who enjoy fast-paced, hard-hitting action. It’s not for those who are looking for a heartwarming story of a boy and his pony, saving a sack full of kittens from a tree. I’m not saying you’re wrong if that is your cup of tea, I’m just saying that once she goes to bed, you should fire up the internet one last time and go watch Six Feet Down Under before you follow your wife to bed.

Oh don't worry ladies, I'm well aware that there are plenty of action-loving female film nuts out there as well. Keep watching after the credits and you will see that Six Feet Down Under is not just a "Mans World."

Check it out now!