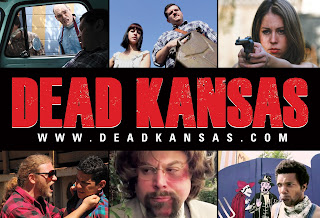 SYNOPSIS: In a post-apocalyptic land consumed by "Rottens", a simple farmer and his teenage daughter struggle to survive. Meanwhile, an unruly gang make a plan to kidnap and sell the daughter for their own selfish profit. With the farmer/gang confrontation, a wicked tornado approaching, and "Rottens" everywhere - who will get out alive?

Dead Kansas is a post-apocalyptic film that has a 1970's throw back look, with a twist of excellent writing and witty dialogue.

Although there are "Rottens", don't expect to see too much of the guts and gore of zombies that you might expect. Instead of special effects makeup and CGI, Dead Kansas mostly uses old school black and white point of view camera work to give the impression of the walking dead.