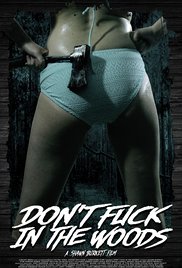 Dont Fuck In The Woods is the latest feature from Concept Media Films. The movie garnered plenty of buzz last year as being one of the most anticipated horror films to be released in awhile. The film ran a successful crowdfunding campaign and despite some production delays it is finally seeing the light of day. The film will be released through Vimeo on Demand on October 22nd followed by its physical disc form release on October 25th. For those horror fans in the New York area, you can catch the world premiere of "Don't Fuck In The Woods" tonight at The Fear NYC film festival followed by a Q&A with cast and crew of the film.

The story follows Alex (Ayse Howard), who after having a stressful time during college finals, is convinced by her girlfriend Jane (Brittany Blanton) that their planned vacation escape is just what she needs. The two girls pile into the car with their group of friends (Nadia White, Brian Cornell, Hannah Herdt, Roman Jossart) to have a fun, leisurely time in the woods. As they start to unwind, something lurking in the darkness has discovered a new and intoxicating scent. It's a modern-day creature feature that's sure to please horror fans.

The film is a fun nod to the old creature flicks of yesterday. Taking the character rules we've learned growing up with horror and slasher films and instilling that within the story. We all know that if you have sex, drink, or do drugs in a horror movie then you better watch your ass. There's plenty of all three in this film. With a title such as "Don't Fuck In The Woods" you know to expect some nudity. The beautiful female stars of this film did not shy away from shedding their clothes a time or two. Don't let the title fool you, the film isn't a porno nor is it campy trash. It's actually a very well made film. As a curious fan I had followed the film online during its course of production and can see that the dedication, passion, and money that all invested truly shines in the final product. The cinematography is beautiful, the performances are great, and the soundtrack rocks.
Without spoiling much, there is a bit of death in this film. I mean, if you're not watching this film for its T&A factor then you're definitely watching it for the blood, right? The special effects are top notch so you gore hounds out there should not be disappointed.

I personally enjoyed the film. Had a great time watching it. It's release is just in time for Halloween this year. So if you're looking for some bloody, boob filled fun then look no further than "Don't Fuck In The Woods". This is some independent horror at its finest!

I actually was fortunate enough to have an interview last year with the film's Writer/Director Shawn Burkett while the film was still in production. If you'd like to check out that interview you can find it here.

For all the latest news you can visit the film's official Facebook page.