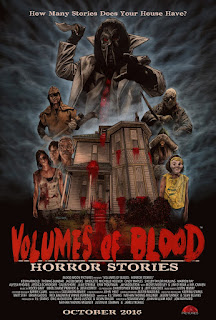 Verite Cinema has a new holiday horror movie for you to snuggle up in front of the fireplace with. Volumes of Blood: Horror Stories is the sequel to 2015's Volumes of Blood, an indie hit that redefined how to create an original idea within an old genre.

Volumes of Blood: Horror Stories steps up the kills to keep your cravings for carnage nourished. You won't have much time to sit back and wish for more from this buffet of blood, it comes full force and spooned right into your horror loving soul.

While the kill scenes may be a little campy from time to time, you probably won't mind, because they have hidden many a horror fan easter eggs throughout the film. If you're watching with a friend, you can quickly glance over to share a knowing smile, or ridicule them later for not noticing something!

The dialogue in the film is better than most Hollywood films when it comes to being witty. I think even Shane Black would be hard pressed not to want to write down some of the lines for use later.

The stories all take place in and around a single home. Such as the first film centered on a single library location, only this time the plot jumps back and forth between timelines. While it can be a bit confusing at times, by the end of the film you will be completely caught up and in the know. Some stories are stronger than others, and for me personally, the current timeline lacked some of the punch of the past storylines. Also, for those who missed out on the first film and are starting off with this one (you're not doing it right) just remember that the first act is purposely hokey, so hang in there cupcake, the carnage is coming!

One thing that really stood out to me in this film was product placement. Maybe I'm just getting older and more cynical, but I'm pretty sure that by the end of the movie I had memorized the phone numbers for a cleaning service as well as a realty company in Kentucky.

All in all, I enjoyed the sequel as a fan of horror movies as well as indie films in general, and wouldn't hesitate to encourage others to enjoy it as well, especially around the holidays.

Keep up to date on the Facebook Page:
https://www.facebook.com/VOBanthology/
And check out the trailer below!