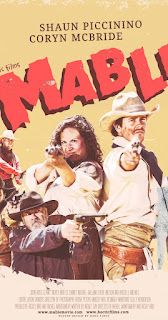 Hectic Films has done it again! Taking the world of Indie Film Making by the reigns and spurring fast and hard with it's latest short film, Mable.

The film finds a gang of ranch hands turned thieves pushing hard West with a few items stolen from Mr. Bedford, who had hired them on to work the fields. Among those items, is Mr. Bedford's daughter, Mable (Coryn McBride).

The story picks up with us meeting Tom Landry (Shaun Piccinino) who meets with Mr. Bedford and company to hear of what has happened. Offering one item of his choosing from what the gang stole, Tom accepts and sets out on his sparrow catching mission. He soon tracks down the gang making camp for the night, and bullets fly.

From the period clothing, to the grime and dirty dental neglect of the gang, this film pulls no punches and hits hard and fast. Delivering the action you want from a western, without all the ballyhoo you get from films twice as long.

Mable is a fun little whap of Western, that shouldn't be missed!
Posted by Terry McGhee at 3:44 PM