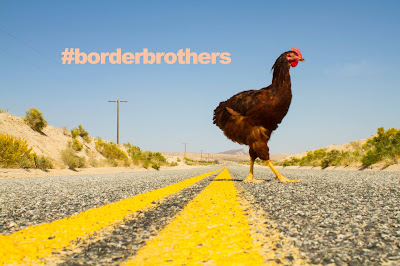 I was recently granted a limited time, secret knock code, that allowed me access to some scenes from the upcoming Hectic Films movie Border Brothers. I couldn't be more excited to see this film, but this wasn't necessarily the case before I made my way to that shady motel door, mentally repeating the knock code to myself, and trying to watch for movement out of the corners of my eyes. Maybe I was just brought out here to be robbed and have my body dumped in a dark alley? Hectic Films is legit... right?!

Before I was nervously toeing dirty syringes out of the way, and slowly shuffling up to that motel doorway, I was a bit apprehensive about a comedy that deals with illegal immigrants, drugs, and a white pool boy. I was worried that as an Indie Film, it would walk up to the line of decency and then just giggle and jump off the side of the moral mountain and leave us with something so offensive you just wanted to take a shower after watching it. I can happily report that that is not the case at all!

One of the first clips I saw showed me just how perfectly balanced the film is. That white knight pool boy who has the lead role? He's not the brightest bulb in the bundle. Those illegal immigrants who are so easily dropped into an obscure land of language barrier and ignorance that you see portrayed throughout Hollywood and television? They aren't in this film either. The illegal immigrants in Border Brothers are probably one of the greatest things about the film, as they are not the ones being judged, but instead, are doing the judging, in hilarious fashion!

Now, don't be scared off by the lack of offensive material, I assure you there is plenty here. It just manages to stay offensively safe, and never just completely runs off the rails. From a law enforcement officer telling his assaulter that he "Hits like a transgender", to the clueless ranting of a confused and out of his element white guy who never quite grasps that his racist remarks are not just being heard, but also understood.

Border Brothers has a little something for everyone, and I am excited to say, I will be one of the first in line to see it when it premiers!

You can see the trailer as well as help to get this movie finished by checking out the link below: