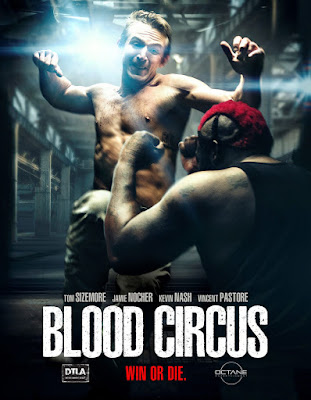 Sean is a loser who spends his days drinking at the bar his ex-works at. Once a promising MMA fighter, now he's a joke, with no job except chasing away paying customers. After rolling a couple of wannabes (and thoroughly pissing off his ex) an offer comes in he can't refuse. Three fights, with the winner walking away large, the losers...... not so much.

Shot in Connecticut on a tight eighteen-day schedule that had a snow storm hit midway through the shoot. With a budget of $750,000 its impressive what director Jacob Cooney and Producers David Gere, Charles Lago, Christopher Johnson put together. The names of the cast members read like a Hollywood blockbuster; Tom Sizemore, Vincent Pastore, Kevin Nash, and Chuck Zito. Christy Carlson Romano is a face most will recognize from the Even Stevens (2003) and a couple of the Cutting Edge movies (2006 & 2008). It is very well shot film, there were a couple really good scenes I had to rewatch. Creative use of camera angles and light throughout.


Poor Jamie Nocher who plays Sean, not that he is a bad actor it's just being surrounded by legends in this movie, he isn't on their level. Plus, fight scenes in a movie with a budget of less than one second of an action sequence in a Mission Impossible film isn't going to show much. The best fight scene in any movie was They Live (1988), the budget was four million dollar and they practiced the fight for three weeks (longer than it took to shoot this movie). The script doesn't help him out much either. Being the lead with so much screen time anytime Sizemore shows up for thirty seconds he steals the scene. Sizemore is one of those actors like Woody Harrison that always play interesting characters showing up in small roles all over the place. Watch Mother Wolf (2016) to see him just take a movie over, he's only in the movie for five minutes. Chelsea Vale is distractingly way too beautiful to play the girl-next-door type. She has a ton of movies coming out in 2017 be interesting to see her in a bigger role.

It is really hard to have a 'fight' movie without a budget. Without money, not much in the world of movies gets done, not choreographing the fights, practicing the fights, shooting from multiple angles, not much makeup. Stallone has talked in interviews about how long it took to film fight scenes in the 'Rocky' movies (1976-infinity). It took days to get a couple minutes of run time. Rocky (1976) also had a bad ass theme song. Blood Circus could really use some music. Oh, and Rocky had a budget of 1.1 million dollars of 1976 money, on top of a badass theme song for its training montage. If we have learned anything from South Park (1997-infinity+1) you have to have a training montage. Overall it's an enjoyable movie, that without its aforementioned budget constraints could be a major Hollywood release.