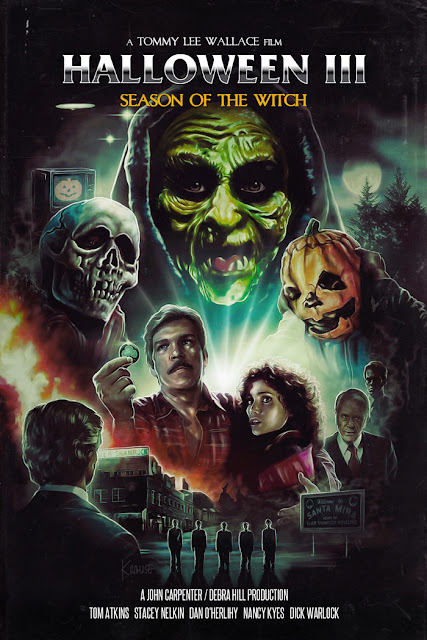 This movie has been terribly trashed by most critics and fans of the Halloween franchise alike. No Michael, horrible script, they cry. 37% on the old Tomatometer, 4.7 on IMDB, 1.5 stars by Roger Ebert, still to this day evidenced by scores of YouTube fans reviews video it is still hated. So to be clear, everyone hates this film. Except me, and I encourage horror fans to watch it. It really freaked me out watching it as a kid. Put a mask on and get blasted by a laser that makes spiders and snakes come cascading out of your ripe over-heated little melon. That is the stuff that makes the boogie man run out of your nightmares and safely back under the bed. Or better yet the kid next door's bed, cause that kid doesn't have such jacked up nightmares. 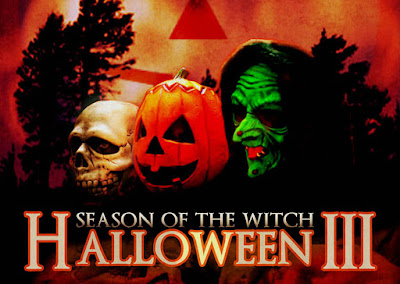 First the bad, all over this movie screams rush job. Looking at the people behind the movie it comes crystal why. Tommy Lee Wallace both a writer and director on H3 also had Amityville 2 the same year. John Carpenter also had a little film called 'The Thing' the same year. On top of 'Escape From New York' and 'Halloween 2' the previous year. 'The Thing' bombed at the box office as well. H3 was released one year after H2. The soundtrack is loud and obnoxious along with script issues. The story jumps around missing key pieces of information. 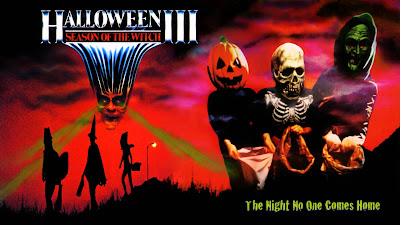 Box office influence, Saying H3 bombed at the box office is simply not true, on a budget of 2.5 million it made 14.4 million during its theatrical run. When placed next to Halloween's numbers of a budget of three hundred thousand and making 47 million it looks like a failure. The year of 1982 itself was some of the problem. A number of big movies came out at that time. ET, Rocky 3, Star Trek 2, Poltergeist, First Blood, Blade Runner, The Thing. Plus a number of horror movies Creep Show, Poltergeist, Cat People, Slumber Party Massacre, Basket Case, Tenebre, Q (highly recommend checking out this film), and Alone in the Dark to name a few. In 1978 there was much less competition. Sure some horror movies came out in 78' but they didn't bring in much money; Piranha 16 million, and Dawn of the Dead 5 million. It was harder for a movie in 1982 to complete for a customers dollar. It didn't help the studios were cranking out garbage killing the genre. Friday the 13th 2 came out in 1981 followed by part 3 in 1982. There was an over saturation of the horror market that year. 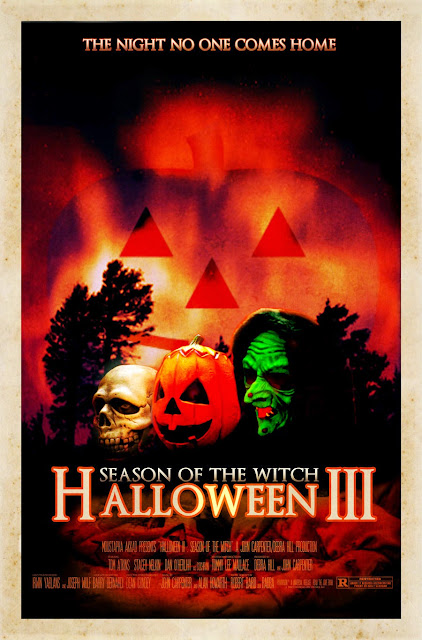 The good, a great idea bringing together the pagan history and consumerism of Halloween. The evil greed of capitalism, and subliminal messaging. An ordinary man getting wrapped up in a corporate conspiracy. Tom Atkins is a great horror movie actor. He cranks out another good performance here. Stacey Nelkin who plays Ellie is both fun and easy to look at. This movie unfortunately made sure she never got another good part again. Another victim of this movie was Tommy Lee Wallace the director. He mostly did low budget and tv movies after H3. Most notably Stephen King's It (1990). While the supernatural and technology gets messily combined together it makes a great vehicle, just don't look under the hood or to closely or at the bondo on the quarter panels, bailing wire holding the muffler up.....

Another great part of the Halloween's idea was having a different story told in each movie. Halloween 2 was made to please the studios. Micheal Meyers was to be killed off and never be heard again after the first movie. The Halloween tag was originally a platform for a new horror idea each time. Seeing that horror movies have become so popular and huge cash cows proves this was legit concept, that the studios blotched. Showtime's Masters of Horror and After Dark Horrorfest crank out great movies. There is no shortage of scripts and talented directors to make horror films. A film genre that has a long history of low budget big returns. A studio could easily capture the horror market every year by finding a good script and trying to put out a decent product, and the right name to market them under. But they did the opposite, make a movie quickly as possible for as little money as they could get away with, pissing off the fans. Plus the Michael Meyer character is boring, only able to slowly walk after his victims never able to even say “Slow Down I don't get much cardio the rest of the year” or "they don't have an elliptical machine at the mental hospital".

Halloween helped create the slasher genre. It opened the door for studios to greenlight many horror films in the 80's. Sure Mario Bava, Lucio Fulio, Dario Argento, Umberto Lenzi, George Romero, Wes Craven, and Tube Hooper had been making horror movies but none of them ever sold a ton of tickets. The most successful maybe Texas Chainsaw Massacre only did thirty million, and it didn't get a sequel till 1986. On top of the additional revenue from the sale of VHS tapes and cable that wasn't around in the 70's. Fred Ray Olen, Troma films, among others flooded the market with all the gore and guts it could handle. By 1982 the horror craze the Halloween franchise set off had started to run amok. Getting bloodier and pushing the limits of good taste, not to mention the 'R' rating. With some really good films being made (and overlooked) H3 was easy to hate or ignore. 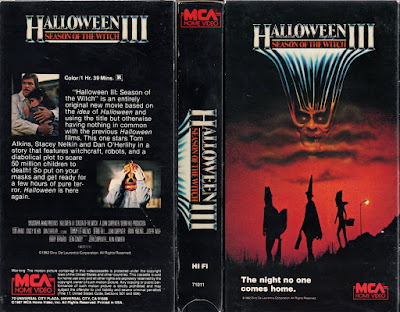 As Bay of Blood (1971) influenced Friday the 13th (1980), Halloween was influenced by others, most notably Eyes Without a Face (1962). Which happened to influence Billy Idol's songwriting too. Halloween influenced a new batch of filmmakers. But the movie hasn't aged well. They showed it recently to college students that hadn't seen it before. The students thought the movie was boring. At the same time, H3 has gotten better with age. It has good acting, the special effects weren't overly cheesy like many other early 80's movies. Some of the bad scenes are equally frightening and funny. Like the housewife that drops dead followed by the husbands heart-attack after little Timmy's head gets blasted. Some of the plot holes are a source of fun arguing with friends what the hell it all was supposed to mean. After sequels four and five everyone got over not having Michael Meyers in H3. The only good thing about H4 (1988) was Kathleen Kinmont (nothing more needs to be said). Danielle Harris was in H4 (1988) and H5 (1989) coming back for Rob Zombie's H (2007) and H (2009). Playing a teenager still! It was really cool and confusing for Mr. Zombie to cast her again (but then again not many people saw H4 & H5). It's unreal how well she's aged. Love to see someone remake H3. Give it the Zombie treatment. Danielle Harris would be awesome as Ellie. Jamie Lee Curtis (who voiced the hospital loudspeaker announcement in H3) could be the evil corporate CEO. Someone really needs to green light this remake! 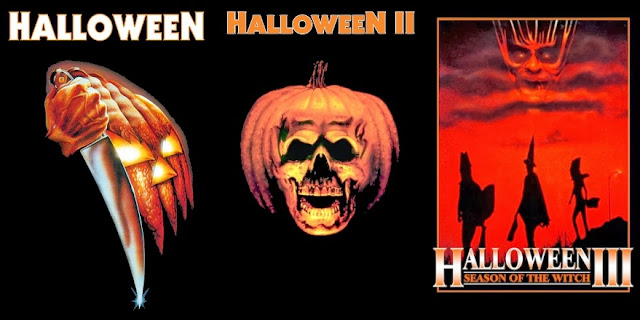