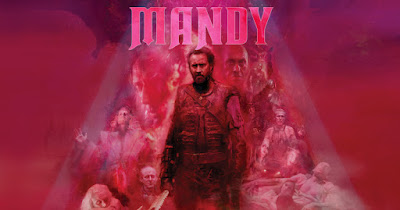 Red lives in the middle of nowhere with his bookworm girlfriend, the perfect place for a little mayhem. A chance encounter on a dirt road causes a cult leader to unleash the spawns of hell on the unsuspecting couple. Just for an opportunity to drop acid with Reds girlfriend. Normally this would be a very short movie but Red isn't just a country bumpkin lumberjack. Oh no, he's secretly a billy-bad-ass. Evil hellions don't stand a chance! 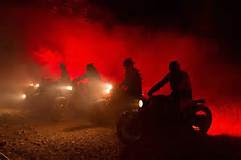 It's so cliche that critics love this movie. Actors starring blankly off into the abyss, full frontal flaccid male nudity, weird lighting, low quality grainy film, symbolism driven flashbacks that are open to interpretation, a painfully slow story that makes little sense, which runs for an hour longer than it should, all the things critics love but have nothing to do with enjoyable entertainment for the rest of us.

One the best things about this movie is Cage stays away from playing an over the top parody of himself for most of the film. The character of Red never really develops, he gets introduced as a simple lumberjack. Then after they take his girl, he goes to an old friend to get his crossbow. Which is never explained. It's not like its a fully automatic assault rifle with a rocket launcher that you have to hide from the government, girlfriend, and mother. Even weirder his friend, after learning a cult with demon spawned bikers from hell for muscle, killed Reds girlfriend, does nothing. But Red goes home and forges a wicked battleax in only a couple hours, should have at least taken a couple weeks, good thing he has a mold laying around for it, and just so it looks cool for his revenge-vigilante-murder spree, he gives it a chrome finish. When he starts taking demons and cult member out one by one he also is suddenly an expert in close quarters hand to hand combat. 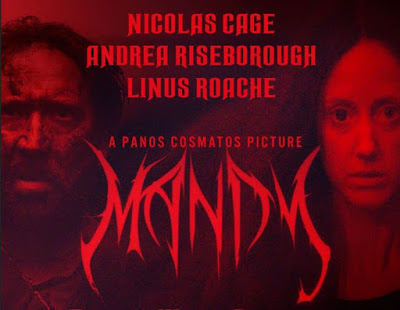 This movie is bad, boring and tedious. All the monsters/demons/hell spawns stay in the dark with only their outlines visible. Which the outlines make no sense or convey little to no evil or terror. The characters, for the most part, are just there. The viewer feels nothing during the initial attack. No attachment either way for anyone. The only feeling I had was relief when the credit finally started rolling. The best thing about this movie is Red's wicked cool retro Tiger jersey! 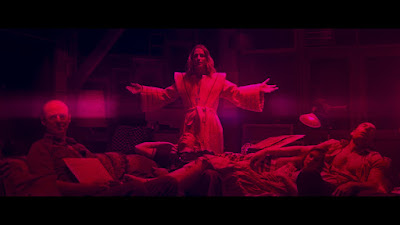